Canon did it again just like Apple. The Canon EOS Rebel T2i impressed me and many other entry level DSLR newbies with outstanding image quality and Full HD video with full manual control performance in a small form factor. Now, exactly a year later, the Canon EOS Rebel T3i exceeds it's predecessor with even more features for the same price point. Sound familiar? Apple iPhone to Apple MacBookPro to Apple anything! 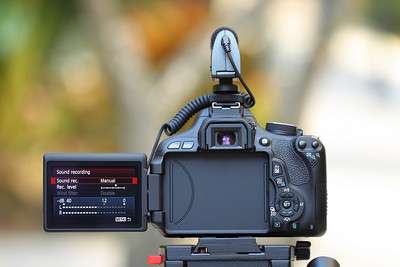 To the amazement of befuddled Canon Rebel T2i owners is the obvious addition of an articulating screen just like the Canon EOS 60D. It does not stop there with the similarities. Remote flash control of specific Canon TTL flashes and manual control of audio for video capture top off a very long list of features. As you noticed in the Canon EOS Rebel T3i Video Test, I used an IGUS Drylin Camera Slider W1080-B to spice up the 1080p video shot at 29.97fps. The IGUS slider used a Manfrotto 701HDV head on top of Benro 3580 tripod legs. A Sennheiser MKE400 shotgun microphone captured my manually controlled audio and the T3i/600D was paired with the Canon EF 35mm f/1.4L and EF 100mm f/2.8L IS lenses. I edited with iMovie'09 and used Quicktime to compress a 550mb H264 video file. Just like the T2i, the new Canon EOS Rebel T3i shares the same glorious 18mp CMOS crop sensor with a high native ISO range(100-6400) and Full HD and HD video resolution at frame rates of 24p,30p and 60p in both NTSC and PAL. I could go on but that is for my upcoming Canon EOS Rebel T3i Verdict and Review. As expected, the T3i captured video flawlessly with the added bonus of the vari-angle screen for high,low and reverse angle perspectives. I captured the Canon EOS Rebel T3i in action for this video test with my Canon EOS 1D Mark IV. I used a Rode VideoMic for audio and used the Canon EF 35mm f/1.4L and EF 100mm f/2.8L IS lenses.

For all Final Cut Pro users out there, I just created a Canon E-1 Movie Plugin fix for T3i video. Do not be confused by all the complicated code in the above picture. It is the actual modified .plist file that Final Cut Pro uses for the Log and Capture feature. For all non Final Cut Pro users out there, the Canon E-1 Movie plugin automatically transcodes the h264 video files to a lossless editing codec called AppleProRes422. Confused? I was at first but if you dare to jump into the realm of Final Cut Pro, all this jargon will make sense to you. For exact instructions to implement this modified .plist file in your own Final Cut Pro software, go to the Discussion Forum on DVinfo.net. I explain with step by step instructions to install the .plist file in your computer. Stay updated on my ChadSorianoPhotoBlog by becoming a Fan on my Facebook Page and following me on Twitter.