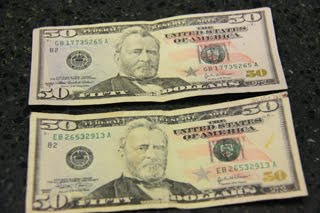 Which fifty dollar bill is real? Look closely because it duped my wife as well as me. The bank teller called my wife saying a counterfeit bill was found in her deposit. Apparently, a real five dollar bill was "washed" and reprinted with fifty dollar markings. The real currency is above the fake bill in the picture. My wife even has a special pen to spot fake bills. In this case, the pen did its job verifying the integrity of the paper and not the fraudulent ink job. 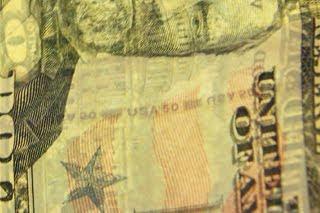 The close up of the real bill shows the legitimate watermark of "USA 50" in fine legible print. The close up of the fake bill shows a legitimate watermark of "USA FIVE", but of course with fake fifty dollar markings.

To make the counterfeit debacle even worse, the bank did not even credit my wife the five dollars of the fake fifty. I was so astonished by this amazing feat of forgery, I wrote about it in The Consumer Warning Network website.